Once again it’s several pictures of the day on a family adventure day starting with heading out of Thayne, Wyoming.

We went to the town square in Jackson,  Wyoming like any other tourist. Took this shot of one of the antler arches. Wyoming is currently having a “That’s Wyoming” contest. You pick up the flag and snap photos with the flag in the pictures and post on Instagram. We have 6 or 7 posted now. I think there’s a prize of some kind but we’re just having fun snapping the pix. I have entered the actual photo contest with a few of this week’s pictures. That is a family member’s back you see in this picture. 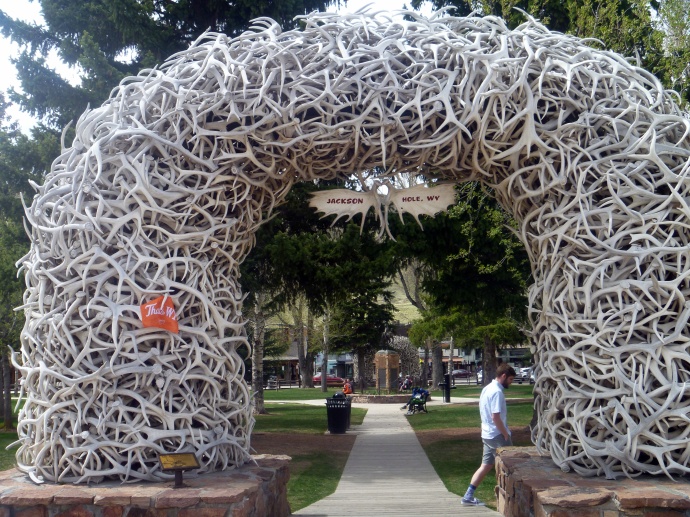 Everyone asks if we’ve seen a moose and today we spotted this one in downtown Jackson. He was very cooperative for our “That’s Wyoming” picture. 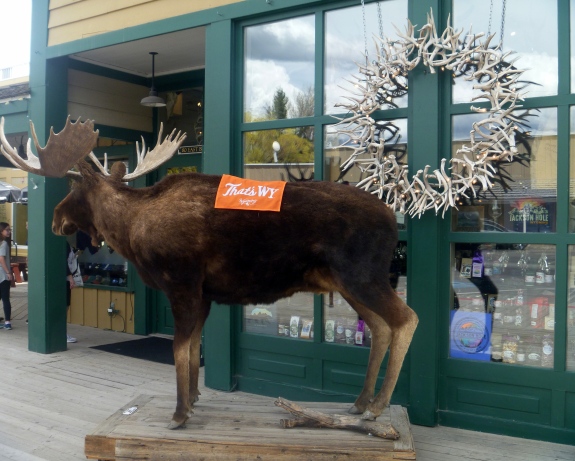 We finished playing tourist in town and drove up the steepest mountain road in the US to the top of Teton Pass. The next two photos are on the way up the mountain. Along the way, some idiot passed us on a double yellow line. We were driving the speed limit. We honked at him. But this is the scenery going up. 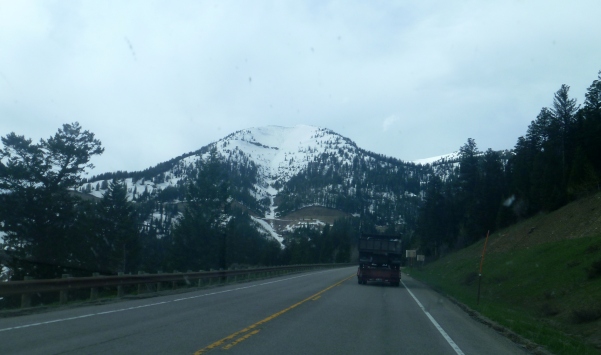 Yesterday there was an avalanche on the pass and they bombed the snow in order to get it under control. That was after getting all the cars off the road. And believe me when I tell you there are plenty of cars and trucks and semis and more. This photo shows how much snow is still here. 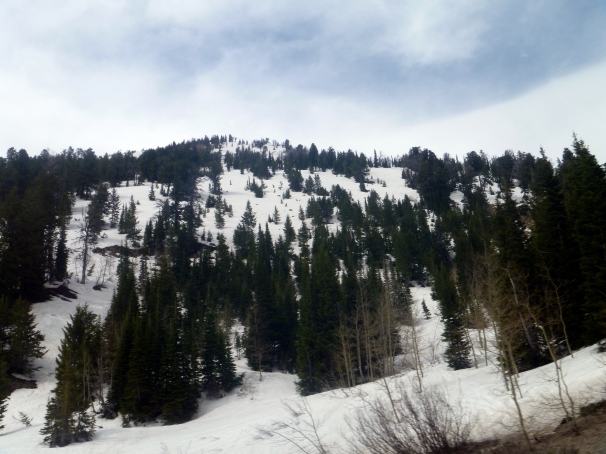 At the summit, we did snap our “That’s Wyoming” picture but we took this one just for you!

The sign in the corner might not be clear but here’s another one of it announcing that you are looking at Jackson Hole. Jackson Hole is a real ‘hole’ surrounded by mountains. It encompasses Jackson, Wilson, Teton Village and other areas within the hole. This sign points the way to the view.

We hung out for awhile, helping some people from Belgium deal with their overheated radiator. Then, looking around we saw this. That little spot is a Wyoming Prairie Dog. Not sure what it was doing up so high as they normally live much lower on the actual prairie. But there it was parked in the snow.

One story about today’s adventure is that we were driving back down the switchback roads and came up behind a Semi (you know, the BIG tractor-trailers). It was smokin’.  Literally.  Its breaks were smoking and so was the rubber on its tires. At least one of those many tires was blown. License plate showed it was from Florida. Like he’d ever seen a mountain before! There is a catch-net which was about 1/4 mile away but he found a wide place in the road—not easy on a mountainside—and pulled over and we were able to pass. We weren’t sure we wanted to be in front of him but his smoke was scary. And smelly! We passed the catch-net and felt better about doing that. Do not know how he fared.

At the bottom heading into town is this sign.

1 thought on “Picture Of The Day”