We’ll get back to more February adventures but first we’re going to Bandon, OR.  We have had a few gorgeous weather days but the last one was 3/3 and I took off for Bandon. Bandon is truly by-the-sea’ as you will discover. The first stop was at the mouth of the Coquille River to picture the historic Coquille River Lighthouse. We have toured it. Small, but tall enough for some great views all around. It is currently closed due to the pandemic but it sits at the edge of a beautiful, long beach to the north of it. That’s seafoam in the foreground. And a few gulls to the right. 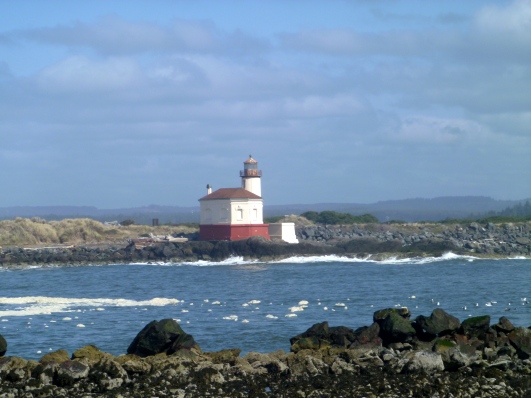 Next is the beachfront drive. I went to the lower road first which I’ve never been on. This is where the lighthouse photo was taken at the south jetty. There are quite a few houses on the beach here and I drove through the neighborhood after taking this shot of the ocean and what Bandon is most famous for—the rock formations just offshore. These were created by earthquakes pushing the rock to the surface. This photo displays the beauty of the combination of the very blue, cloudless sky, blue water, white crashing waves and driftwood as well as the start of the rocks. That’s a fog bank out at sea. 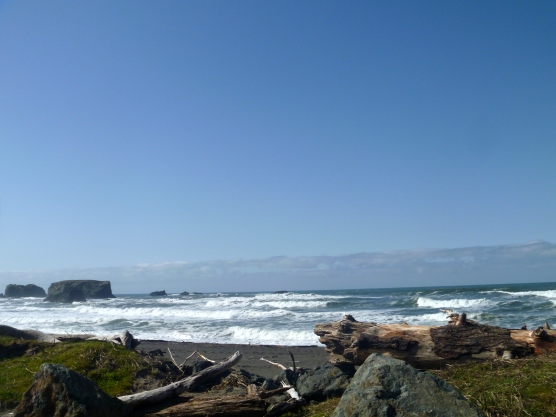 Some of the housing is quite interesting looking. This duplex is a vacation rental. 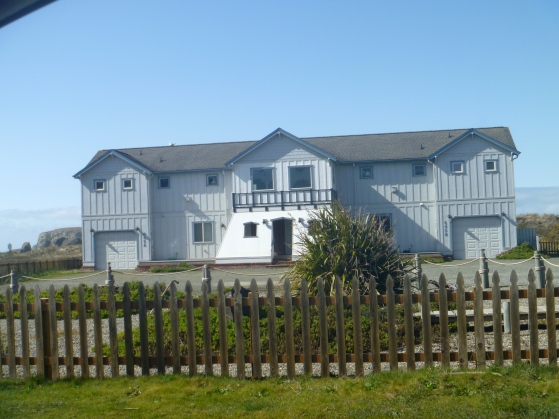 These white geese are apparently residents of this lower neighborhood as I saw a woman come out of the building to your left and toss out some feed. I imagine the Blackbirds partook also. I wondered how the neighbors liked them. 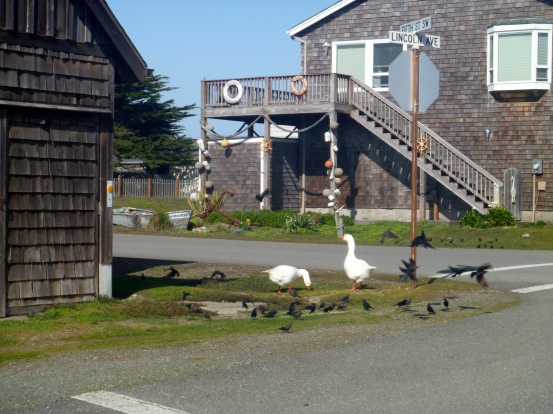 Some of the homes had a lone Captain Sentinel standing guard. 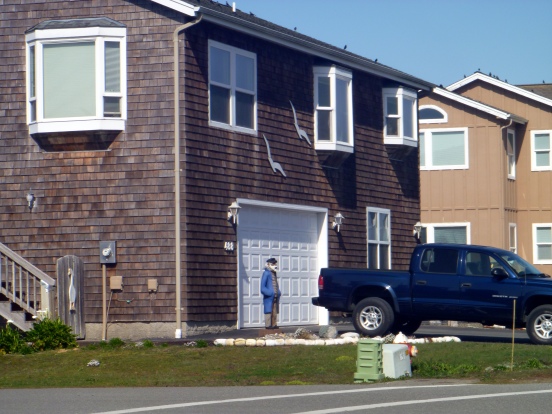 The next adventure was up on the cliff road which is high above the beach and ocean with great views if you are a house on the edge. There are several small motels/hotels up here. Not many years ago, some of them were in bad shape and not in use. No more. They have all been spruced up or re-imagined and are up and running. Bandon is a very popular summer resort area so there are many rentals of various types. There is a huge Best Western on the south end of this road that has grown over the years. But this photo is of one of the spruced-up, small motels within the residential and vacation rental neighborhood. 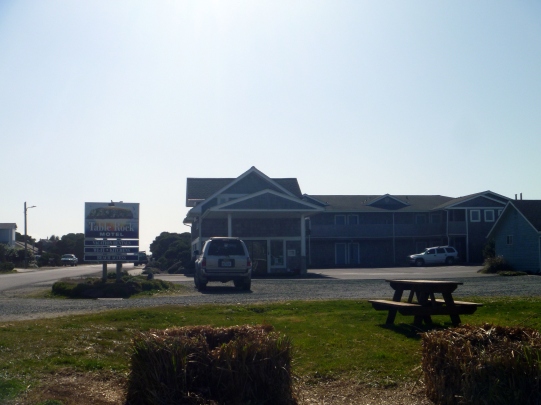 Here’s another shot of the ocean from up top showing the vast expanse of the beach (and a few rocks). Bandon is notoriously misty due to all the crashing waves on the rocks and shore. But this day was unbelievably clear. It was a pleasant surprise! 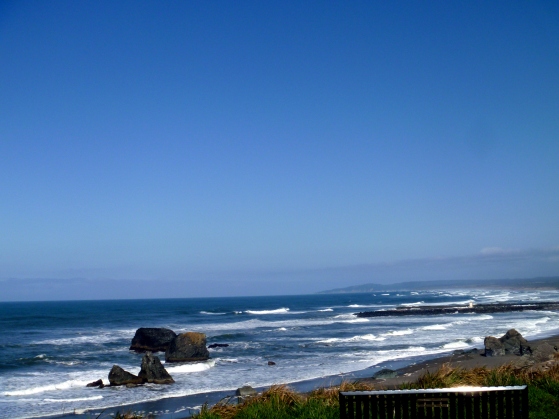 This next photo displays some of the many rocks here. 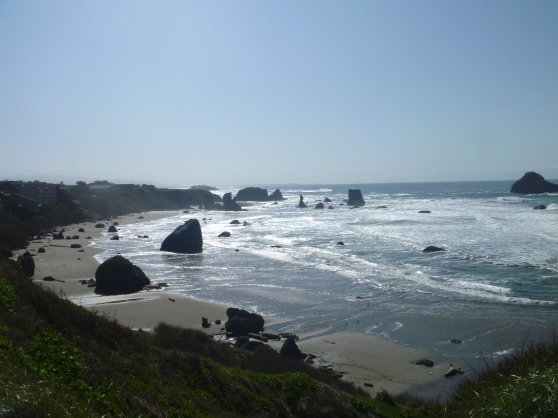 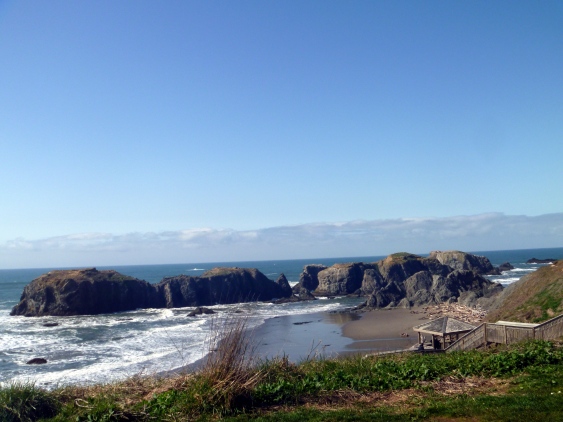 The most famous rock here is Face Rock. Inns and streets and more are named after Face Rock. There are many Native American legends about this rock and how it came to be but I picked this one.

A ‘potlatch’ (feast) was planned by the four chiefs of the coast in honor of the great Chief Siskiyou coming to visit, bringing his beautiful daughter, Ewauna, with him. Ewauna had never seen the ocean and was fascinated by it, thinking this was the place where the beautiful white clouds were made that she saw back at her home in the mountains.

The feast was a great one as the tribes wanted to show how prosperous they were. There was much food and they feasted until they could eat no more and fell asleep where they were. Ewauna had been warned not to wander alone to the ocean but she could not resist and ran and danced and sang under the full Chinook moon coming closer and closer to the ocean until her feet touched the cool water.

She started swimming in the ocean and swam and swam further and further away from the shore until something grabbed her. It was the evil monster, Seatka, and he tried to make Ewauna look into his eyes where all his power was. But, she would not and just stared up at the moon in the sky, her eyes never wavering.

When Chief Siskiyou awoke and found Ewauna missing, he and all the tribes ran to the ocean to discover her laying out in the water looking up at the white clouds. Seatka was sitting behind the large rocks near the shore still trying to get Ewauna to look at him. She wouldn’t. Many, many moons she has been there and now they have all turned to stone. The following two photos are shots of Face Rock and clearly show the face of a woman. 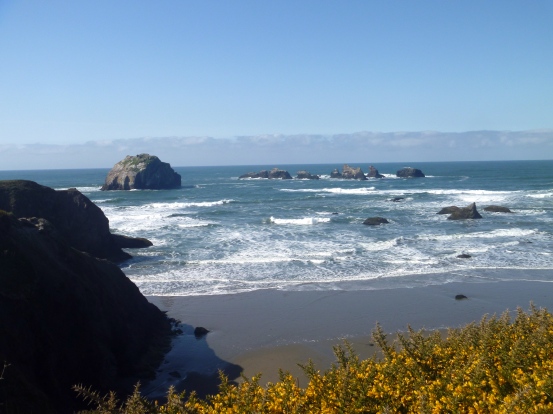 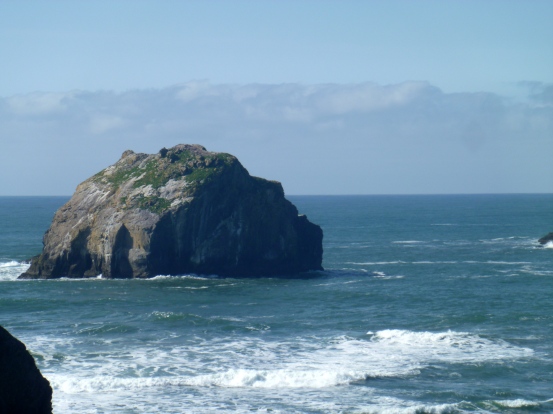 Another variety of housing shows this street-level parking for the vacation rental’s roof you see looking out at the rocks. 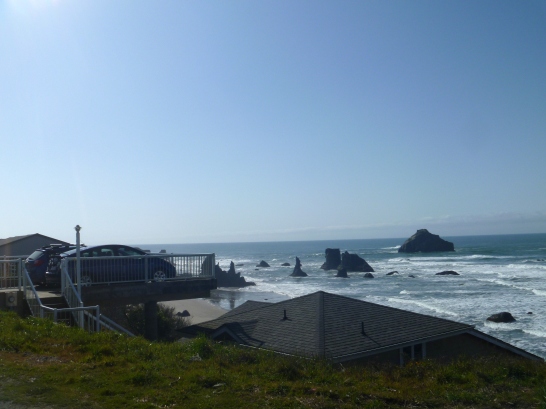 The plant in this next photo of yet more rocks, with the yellow flowers, resembles Scotch Broom but in reality, it is Gorse. Like Scotch Broom, Gorse is very invasive and vastly more dangerous. It is covered with thorns and has an oil that easily fuels fire. At one time, Bandon was surrounded by Gorse that fueled a huge fire in the 1930s that killed 14 people and burned most of the buildings in Bandon to the ground. 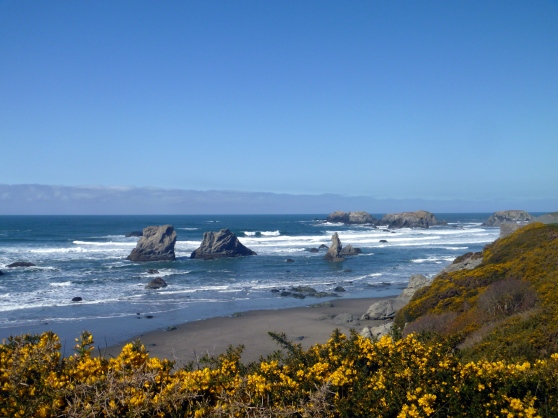 This next shot of the ocean shows again how vast the Oregon beaches are. They are a great place to walk, explore and discover shells. 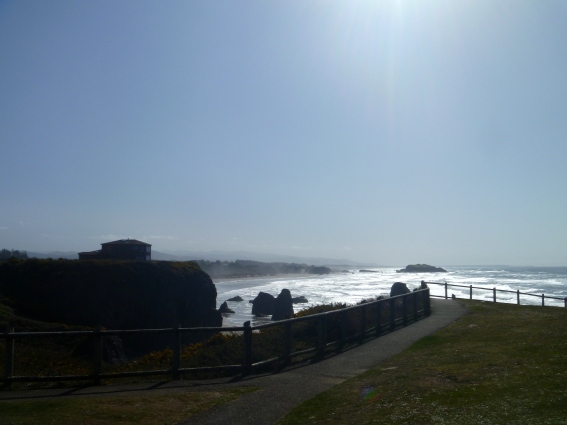 Another cliffside house. It would be fun to live here. Some of the housing is lived in year-round but much of it is closed up for the rainy season as the owners spend their winters in sunnier climes. 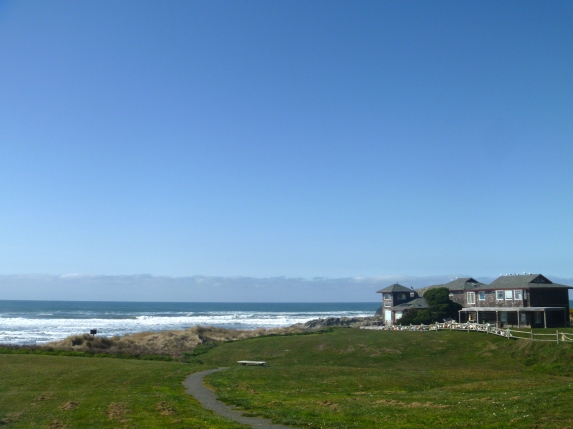 Watch for more Bandon-By-The-Sea adventures coming soon, along with continued ones from the North Coast of Oregon.