Winter in the Northern Mid-West was extreme this year. Record cold temperatures, frozen solid lakes and tons of snow. But what of the freighters that haul and deliver materials around the lakes during the warm months and can’t maneuver the lake ice during winter?

They anchor the 680 foot freighters in the rivers that feed the Great Lakes. For our purposes here, the Huron River in Northern Ohio is host to two of the American Steamship Company’s really big freighters.

The Adam E. Cornelius and the John J. Boland previously docked in port at Toledo but had some kind of tiff and the powers that be decided to dock in the Huron River at Huron, Ohio. In spite of taking the entire day to dock such huge ships, they are very happy at dock in Huron.

To be certain ice doesn’t trap or damage the colossal vessels, they have state-of-the-art bobber systems that stir the water to prevent the formation of ice around the ships.

26 crew members and contract workers spend the winter repairing the ships before these 42 year old vessels get back into service in June.  During the warmer months, these two behemoths will travel throughout the Great Lakes picking up and delivering materials such as iron ore pellets, coal, limestone and grains from Ohio farms for businesses at various ports, rail yards, marinas and harbors.

The two freighters valued at $10 million to $15 million dollars are considered an asset by the Town of Huron drawing attention to the developing waterfront.  They are quite the site when you are up close and personal! 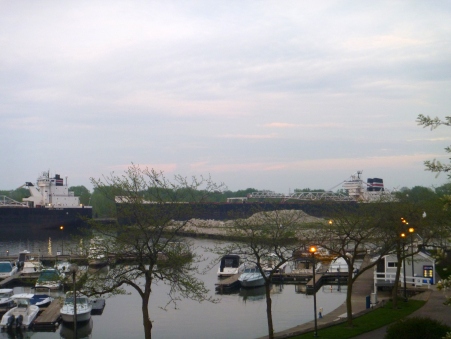