Following Theater Director Patrick Murphy’s introduction on Saturday, February 24, the California Guitar walked on to the Museum of Instrumental Music’s stage in Phoenix, Arizona, and the musical magic began.

The opening piece was Mason Williams’ “Classical Gas.” Originally titled “Classical Gasoline,” this tune was envisioned by Williams to be “fuel” for the classical guitar repertoire. And fuel it was for the seventeen selections played during the ninety minute, non-stop, electrical evening of pure guitar music.

The CGT met 27 years ago during a lengthy Guitar Craft seminar in the English Countryside at the Red Lion House, home of legendary guitarist Robert Fripp. They have been together ever since. Without this gathering place, these three might never have met coming from such diverse backgrounds. Bert Lams is from Affligem, Belgium, Hideyo Moriya is from Tokyo, Japan, and Paul Richards is a native of Salt Lake City, Utah. It is their diversity that makes them unique as each one has something different to contribute.

Each of these fine musicians is also a composer and they often compose together. Early in the evening, they played Moriya’s composition titled, “Komorebi” Inspired by the Japanese word, Komorebi, it is a term that in English translates to something like walking in the forest with sunbeams streaming down through the trees. It is also the title of their most recent album. It is a very beautiful tune eliciting the peace and quiet of a walk among the forest trees.

While all of the trio’s compositions were good, one of the best was “The Train to Lamy.” Lamy, now a ghost town, is or was a small town just south of Santa Fe, New Mexico. The trio performed there in the 90s and met a local character they called “the old, hillbilly cowboy.” He was the inspiration for this western sounding piece with its sweet melody, very western strains, the sounds of a train traveling along the tracks and a Spanish-influenced melody within which Lams played a jazzy improvisation. It ended too soon.

Part of their repertoire includes familiar music recorded by the Ventures. The Ventures continue to be an inspiration for the CGT. “Apache” by Jerry Lordan stood out with its western sounds and the trio’s famous sense of humor as they did a walking step during some of it that was inspired by Fripp as a “walk by” during a Guitar Craft seminar. Another selection, the theme from The Good, The Bad, and The Ugly by Ennio Morricone, gave the trio the opportunity for a bit more humor. Moriya started the piece by playing drum on the wood on his guitar. There’s a short phrase in the music that allowed Richards to tweak it making the audience laugh. And more. At the conclusion of the piece, Richards announced that “This ends the Spaghetti Western portion of the program,” causing great laughter among the audience.

Occasionally between selections, Richards talked about some of their equipment and their guitars. Richards uses a small, hand-held device called an Ebow or Energy Bow. It sits on the strings and keeps them vibrating to obtain some unusual sounds.

Richards also introduced the individual guitars the musicians play. He spoke of the various kinds of woods they are made from. Each one is made from more than one kind of wood. Richards and Moriya both play Breedlove instruments made in Bend, OR. Raymond Kraut of Eugene, OR, made Lams’ hand-built guitar and was in the audience. Jason Kostal of Phoenix, AZ, is making a new one for Richards. Kostal was also in the audience and has graciously loaned his “on stage” photo for this article.

All three CGT artists are very talented and all had solo parts scattered throughout the evening. Moriya stood out in Radiohead’s “Daydreaming.” He also had the audience laughing heartily as he stood and took photos of them imitating the typical Japanese tourist. Richards had solo work sprinkled throughout with his unique sounds. But while they all obviously enjoy what they are doing, Richards enthusiasm stands out through his engaging smile and his movements with the music that is almost like dancing. Lams, an honors graduate of the Royal Conservatory of Music in Brussels, Belgium, is truly a classically trained guitarist. He shone in their exceptional arrangement of J.S. Bach’s “Toccata and Fugue in D Minor.” Lams also played several intricate, jazzy cadenzas in many of the pieces.

The sold-out crowd gave enthusiastic applause throughout the evening but at the end, their standing ovation brought the trio back to the stage to play one more piece. Richards called it “our sing-along song,” but he would not reveal the name. It took very few beginning notes of Freddy Mercury’s “Bohemian Rhapsody” to sound before the audience was prepared to sing-along. And sing they did in soft, melodic tones. Richards sang every word with them.

It was an enchanting evening all around. The California Guitar Trio will no doubt return to the MIM in the future. If you get a chance to see them, do. This performance was absolutely perfect and they just keep getting better. You will be in for a real treat. 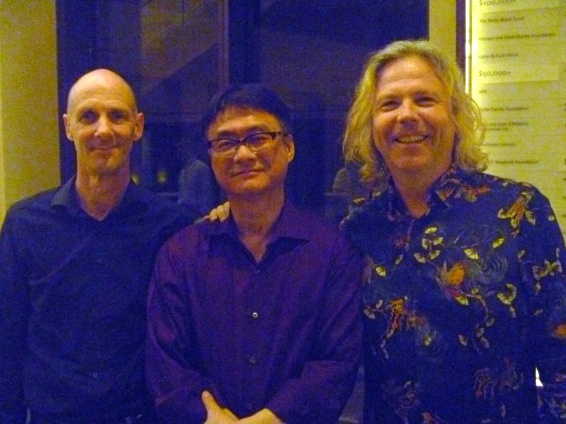 3 thoughts on “The California Guitar Trio at the MIM”