Wyoming is still a bit about being the ‘Wild West.’ Cowboys ride the open range moving cattle. Branding events occur at least annually on the ranches. Docking sheep is a necessary activity. And those that do all that work occasionally get to town and get drunk and sometimes even ‘shoot ‘em up’ riding horseback through the bar. Yes, you can experience all of these things. But, what do they have to do with Johann Strauss, Aaron Copland, Arturo Marquez and Ludwig van Beethoven?

They do because sometimes even Cowboys go to college and take music classes. If they are good enough, they can play in the University of Wyoming Symphony Orchestra that is comprised of UW music students under the direction of Dr. Michael Griffith.

On Thursday, October 19, 2017, the orchestra presented its first concert of the 2017-2018 season in the Buchanan Center for the Performing Arts on campus. It was an ambitious program that the students were mostly up to. As concert-goers waited for the doors to open, a trio performed preconcert music. Their renditions of a Beethoven trio and a Rachmaninoff trio were excellent.

The opening concert piece was the “Overture from Die Fledermaus” by Johann Strauss, Jr. This is a well-known and very recognizable overture and the orchestra performed this work well. The solo oboe rang out clear and true. The bowing of the double basses can only be described as enthusiastically delightful. The concertmaster was obviously enjoying every minute of what he was doing and had the music mostly memorized. The violins were precise with great intonation. The musicians watched Dr. Griffith closely. The only disappointment was not being able to hear the violas. Their sound was muffled directionally, plus, they were overwhelmed by the rest of the orchestra most of the time. When they could be heard, the sound was lusciously beautiful. 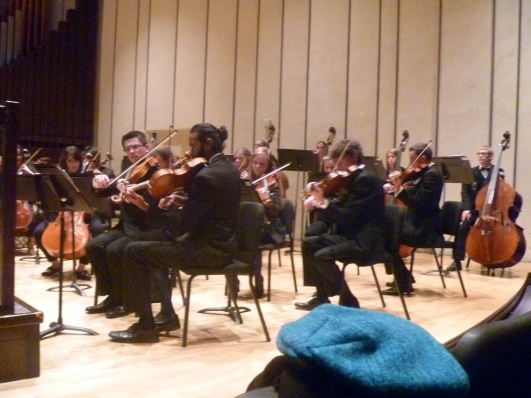 The second work was the “Concerto for Clarinet” by Aaron Copland. It was performed by Dr. Blake McGee, Assistant Professor of Clarinet at UW, and a smaller, student chamber orchestra. Copland was commissioned to write this piece by and for jazz clarinetist Benny Goodman. According to Dr. McGee, who also teaches music history at UW, Goodman told Copland that what he had composed was too difficult and asked him to rewrite some. Copland did and removed parts and simplified parts. That fact is not very noticeable when listening to this piece. It is still a difficult work with elements of jazz written into Copland’s modern classical style.

Dr. McGee played this very complicated work in its entirety with seemingly no effort. The first slow and expressive movement was just that with beautiful, perfect tones in a wide range. Dr. McGee is the epitome of “the music is within” as he sways as he plays. One almost expects to see him break into a graceful dance. 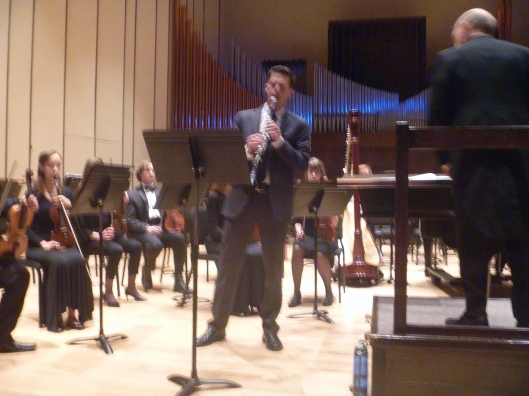 The second movement, the Cadenza, was dazzlingly all over the place and again, played flawlessly. This unaccompanied movement is very jazzy and almost seems improvised as jazz often is.

The third and faster movement starts with the tic toc sounds of a clock. While Dr. McGee is obviously concentrated on his music, he manages to smile at the violins during a brief pause. The music turns even jazzier as the clarinet must play well with others at times and does.

The smaller, student chamber orchestra did well. It is not easy to keep up with someone of Dr. McGee’s caliber but, while at times a bit muddy, the violins did manage to keep up. The cellos stood out nicely. The harp was almost impossible to hear being overwhelmed by the other instruments. But the big conclusion here is Dr. McGee who is literally a whiz on the clarinet. UW is blessed with this very talented musician on staff who is also principal clarinet with the Wyoming Symphony Orchestra in Casper.

Latin rhythms are always popular as many of them are peppy and upbeat. The slower ones are earthy and inspiring. Dr. Griffith’s next selection for this concert lived up to those descriptions. Arturo Marquez’s “Danzon No. 2,” a commissioned work composed in 1994 for the National Autonomous University of Mexico, provided all of the varieties and colors that comprise Latin rhythms. Salsa, tango and more. This work includes passages that are alternately slow, frantic and exciting as Latin rhythms are. The music is obviously fun to play as was expressed on the musician’s faces. The percussion section was very important and often stood out well. Various instruments performed solos here and there very competently. The brass section was also shining ever so brightly. Even Dr. Griffith was more animated, conducting with bigger movements. Well played, this work was joyous to hear and to watch being performed.

Following Intermission, the orchestra took on one of Ludwig van Beethoven’s more familiar works, “Symphony No. 6, Op. 68 Pastorale Symphony,” composed in 1808. Flutes and oboes, French horns and bassoon, along with the percussion all stood out amazingly at times. The violas were again difficult to hear. The violins worked hard at this piece. However, the orchestra as a whole struggled at times. There was an occasional lack of precision and they were not always together. At one point, Dr. Griffith had them tune again which was needed as the intonation was not always good. This was a big undertaking and a good challenge for the musicians. While not a perfect performance, it was still enjoyable. The best part of the enjoyment was watching so many talented young people in this Wyoming college orchestra. 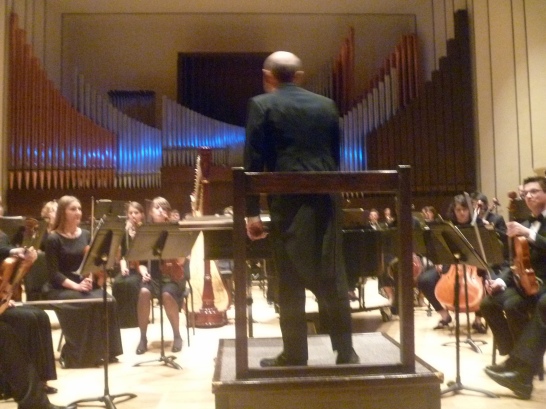 Many years ago Wyoming had a band and a small bit of what was termed modern dance. It has been heartening to watch the music and dance programs at UW over the years grow, expand and become something of substance that the entire state can be proud of. The UW orchestra is fortunate to have someone with Dr. Griffith’s knowledge, skills, experience, talents and musical gifts at the helm. 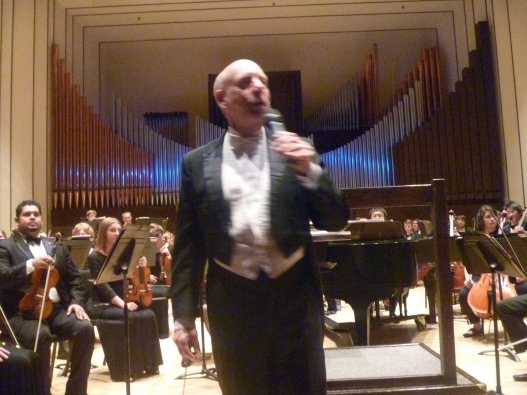 One last aspect for this orchestra is the community and alumni support they have. The auditorium was filled and patrons filled the printed program also. Bravo to them all!