The first Oktoberfest occurred in 1810 in celebration of the marriage of Crown Prince Ludwig and Princess Therese von Sachsen-Hildburghausen in Bavaria. This celebration was held 5 days after the marriage with a large feast in front of one of the gates into Munich. There were horse races for many years and in 1811 an agricultural fair was added (Farmer’s Market). In 1818 beer pubs were added along with performers.

The festival drew crowds of tourists who learned about Bavaria and its people. By 1887, traditional dress in the way of lederhosen (leather shorts for men) and dirndls (a bit like pinafores for women) became the norm. Traditional dance was done in costume and included Schuhplattler Dance (traditional men’s slap-dancing) and couple polkas.

Today, Oktoberfests are held in September due to the milder weather. In Munich, the fest lasts for 16 days starting on a Saturday in September and ending on the first Sunday in October. Oktoberfest is always great fun and there’s always beer. Lots of beer.

In the US there are many Octoberfest celebrations and the Oregon Coast is no exception. This weekend on Saturday, October 7, is the Pacific City Octoberfest.

From 11 am to 8 pm, the Kiawanda Community Center will host its 2nd annual Oktoberfest. This event is a non-profit fund raiser to benefit 3 worthy community entities. This is the day Pacific City celebrates the community’s Germanic and Swiss heritage and the fall season. Arts and crafts, traditional folk dancing, fine wines, traditional German food and live music and beer—lots of beer—will be some of the activities to partake of. This is a family day and many events are geared toward youth. There will also be adult games with prizes awarded during this fun-filled day. 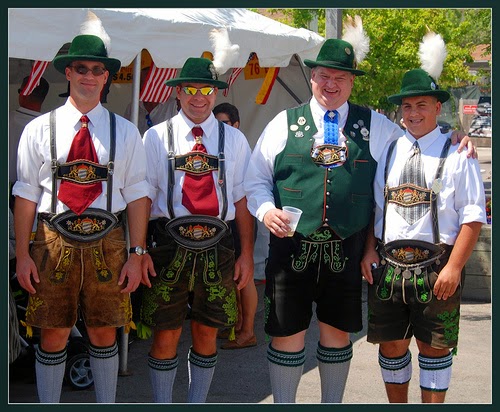 Dust off your dirndls and lederhosen and join in the fun. There is a cash prize for the best, authentic German costume. And beer—lots of beer!

www.umpquahaven.com is a 135 mile drive up the beautiful Oregon coast from Pacific City. Stop in and visit us on your way or stay with us. Leave Umpqua River Haven about 8 am to head to Pacific City and return before midnight to your own bed in the serene charm of our Oregon forest setting. We might just tag along with you!