Cleveland’s Public Square is the center of the downtown area. It was part of the original town in 1796 that was overseen by Moses Cleveland. It is ten acres and has recently been renovated to include green spaces and to be more pedestrian friendly. The Terminal Tower building opens onto the square. 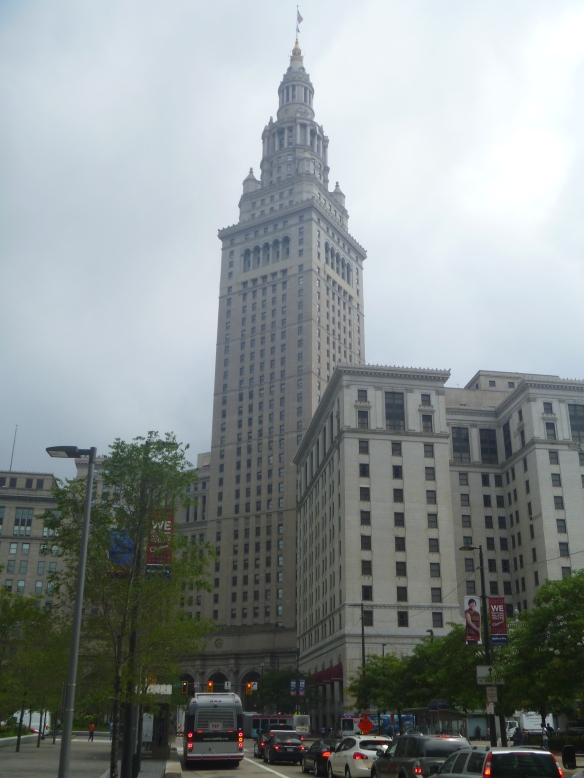 There are other buildings, old and new, around the square including the Old Stone Church you saw earlier. Also on the square is the Higbee’s Department Store building that was made famous in the 1983 movie, “A Christmas Story.” 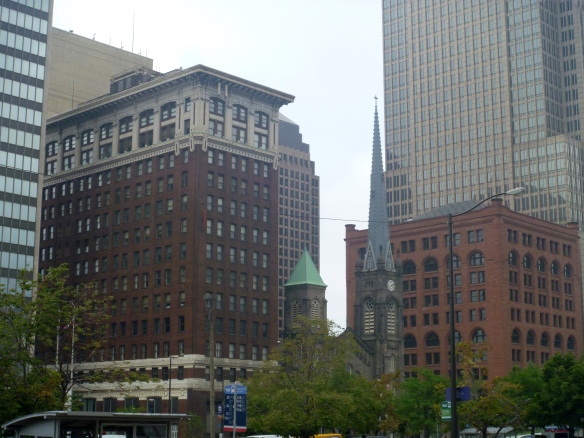 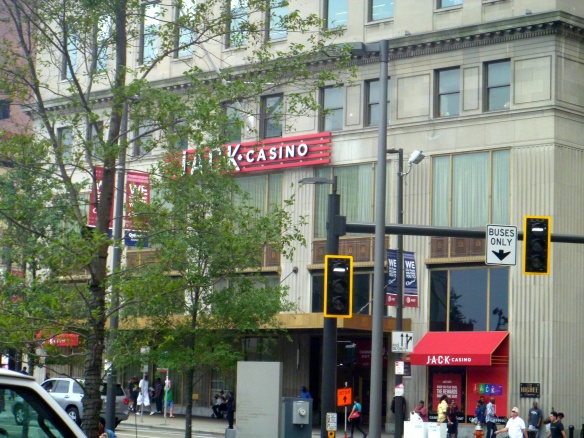 50 years ago and more, Public Square was a busy place with passengers coming and going through the Terminal Tower and three big department stores either on the square or a short distance away. Clevelanders and suburbanites alike made traditional visits during the Christmas holiday season to the square. They came to see Higbee’s and other department store holiday decorations and those in the Terminal Tower. Plus, it was a tradition to go up to the top of the Tower at night to see the holiday lights reflecting in the snow on the streets below. Kind of a winter-wonder-fairyland.

We’ve talked before about the Tower and that it is still possible to go up in it at prescribed times with a purchased ticket. The Tower is 52 stories high (771 ft) and was built during the skyscraper hey-day of the 1920s and 1930s. At the time, it was the second-tallest building in the world. It was also the tallest building in North America outside of New York City. It was the tallest building in Ohio until the Key Tower was completed in 1991. It was designed for offices but built over the Cleveland Union Terminal rail station. 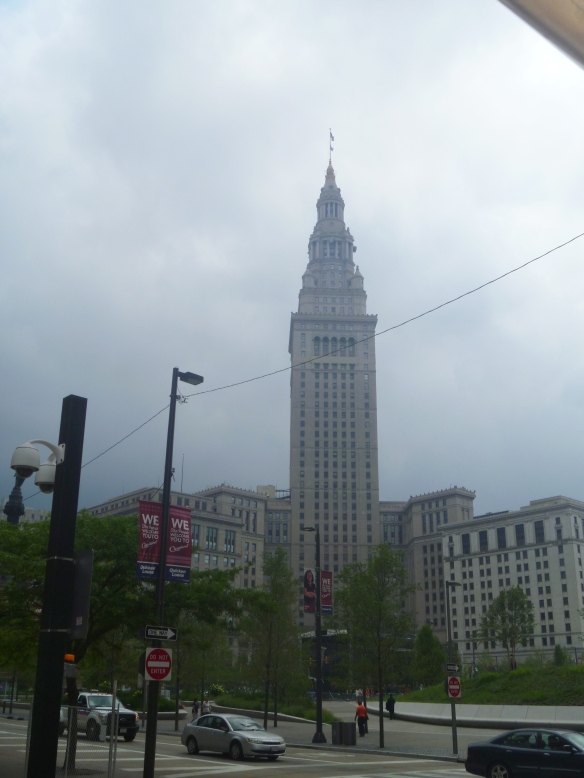 As we travel around the congested Square, there are many historic things to see. The historic Renaissance Hotel and the doors into the Terminal Tower are both on our route. 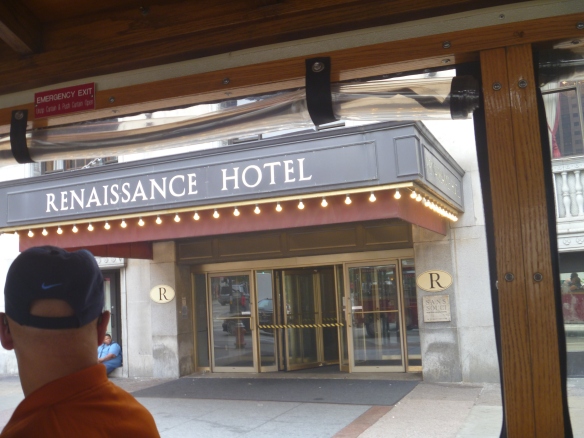 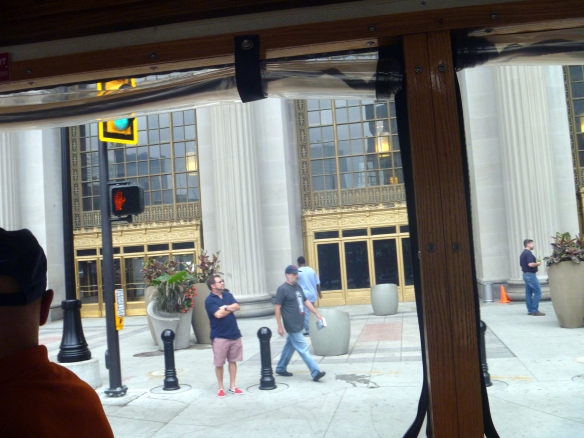 One thing that commands our attention is the Civil War Memorial, also known as the Soldiers and Sailors Monument. It honors soldiers and sailors from Cuyahoga County who served during the Civil War. All four sides have statuary that commemorates this great event in our history in various ways. One of the background buildings is the Terminal Tower. 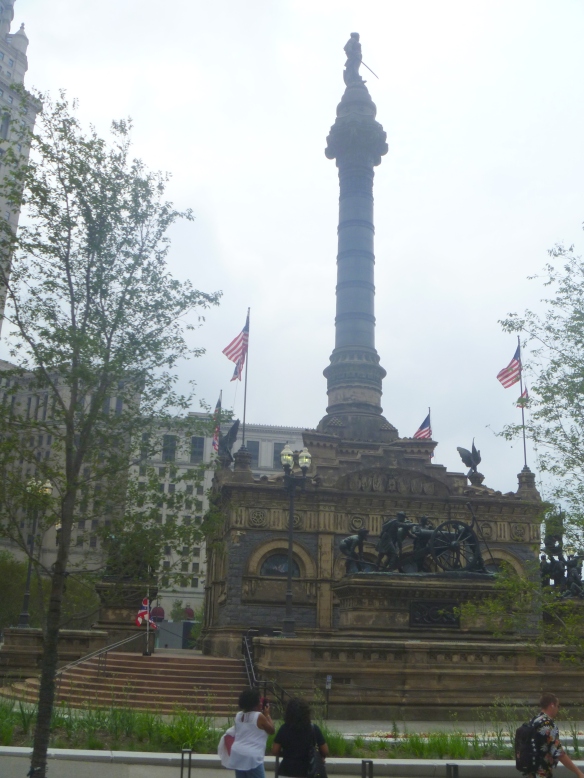 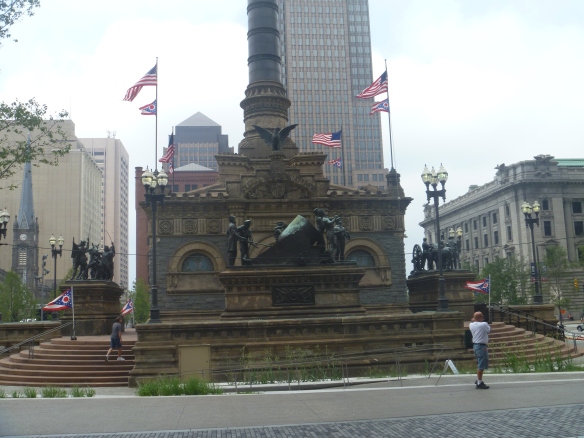 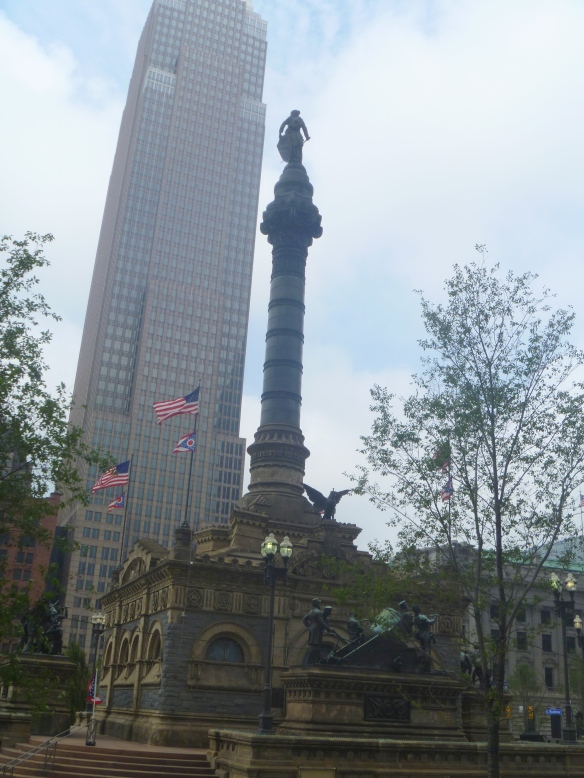 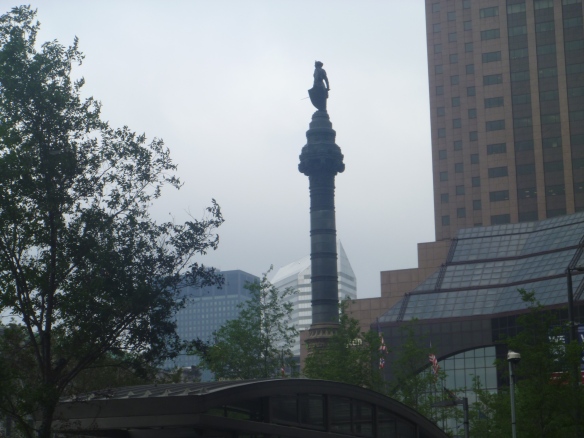 We were also fascinated by the reflection of the Terminal Tower in this modern building. Thanks to my tour buddies for point this out! 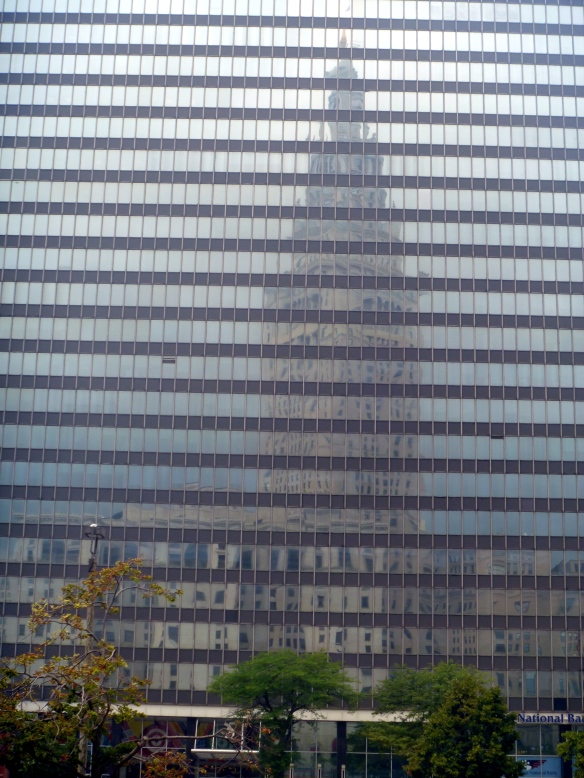 There are statues of various historic figures on the square. There are fountains like this one. 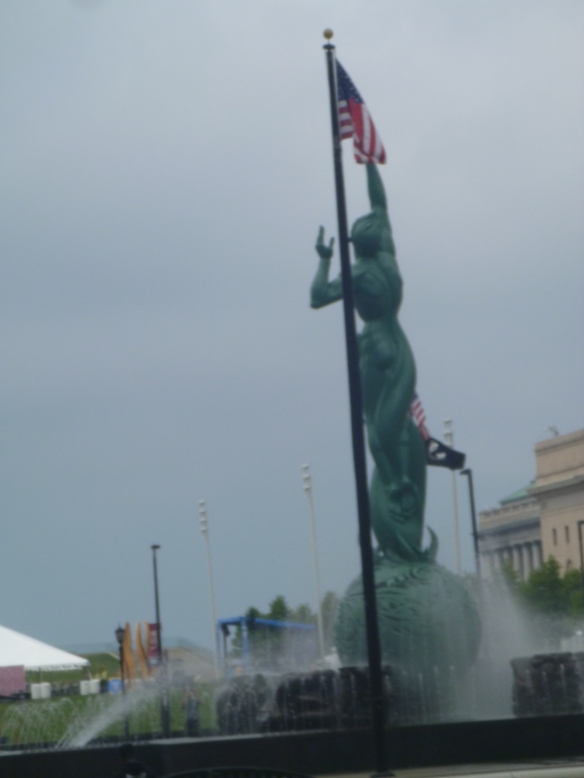 Many beautiful and historic buildings are on or near Public Square. 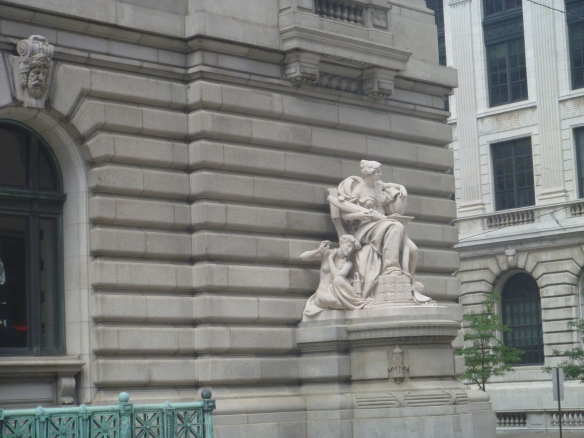 The historic May Company Building. 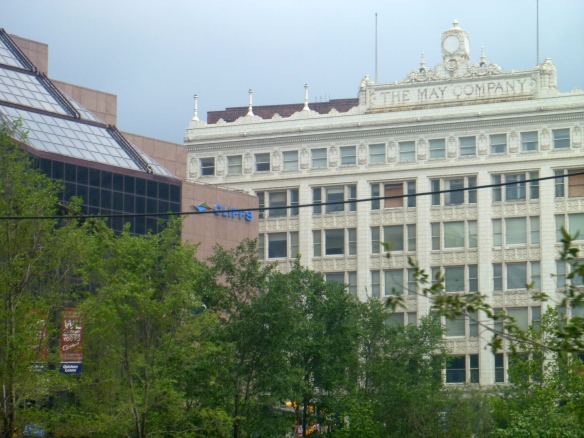 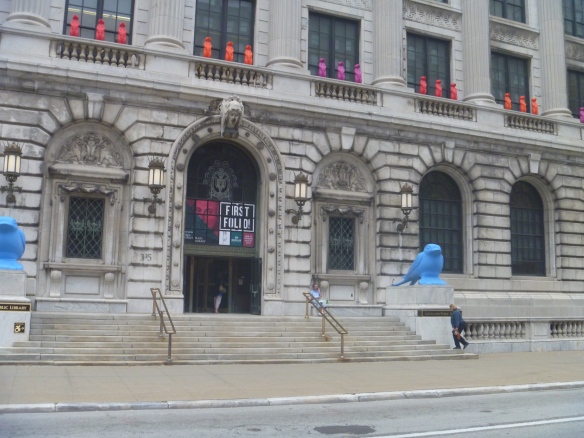 The Federal Reserve Bank of Cleveland. 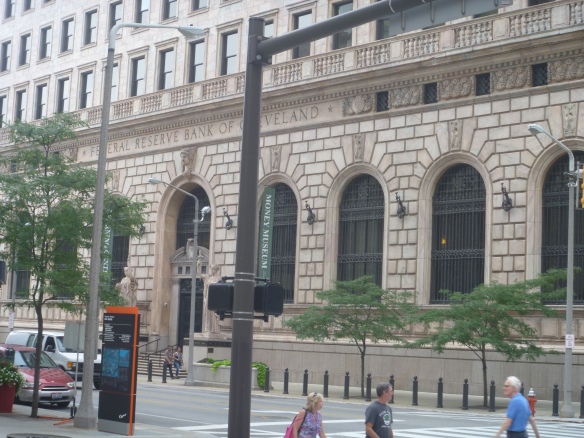 The impact of the Republican National Convention here can still be seen in these banners hanging from more historic buildings. 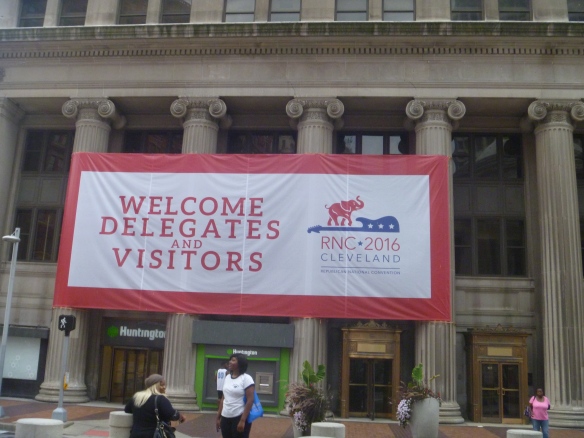 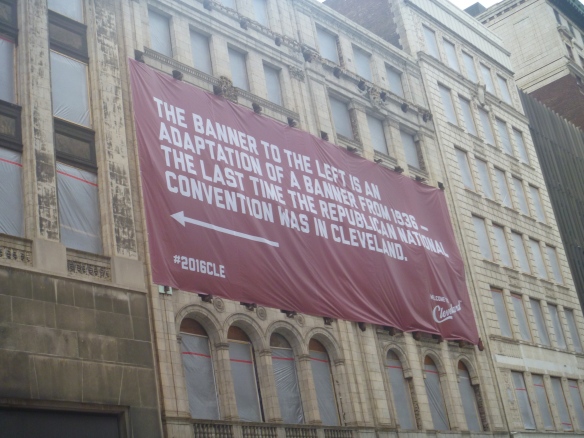 There is much to see here. With the new renovations, Public Square is even more beautiful, interesting and easy to enjoy. You will discover more for yourself when you visit downtown Cleveland, Ohio. Also, stay tuned here as we have more coming from the Lolly the Trolley tour.