Located 1.1 miles offshore from Tillamook Head where the seas frequently turn violent, the Tillamook Lighthouse is a story of extreme adversity in the building and operation over the years. Commissioned for construction by the United States Congress in 1878, actual construction was begun in 1880.

There was much controversy about building on a rock and it seemed wasteful and foolish until a cry of outrage went up in 1879 when surveyor John Trewavas was put ashore and slipped and drowned. Construction commenced but in secret due to public opposition. The crew was sequestered on the U.S. Revenue Cutter Thomas Corwin.

Fighting off families of sea lions and battling heavy seas, four laborers and head of construction, Charles A. Ballantyne, were put ashore October 21, 1879. They carried all manner of equipment, provisions and shelter with them. A few days later additional quarrymen arrived along with a small derrick.

In order to get men and supplies from ship to shore and back again a line from the Corwin to the rock was rigged with a “breeches buoy” that the men sat in (see Interesting Nautical Stuff for definition of breeches buoy). Due to the motion of the seas during transfers the line would often go slack causing the men to become drenched. This device was used to move men and supplies on and off the rock until the lighthouse was unmanned in 1957.

Working on the rock was not an easy task. Early in construction they set up shelters and landed tools and supplies all done in exposure to the wind, storms and high seas. In January of 1880 big storms caused pieces of boulder to fly about and supplies, provisions and equipment, including their “traveler” line to the Corwin, to be swept away. The storms came close to sweeping the men off the rock also. The Corwin was not able to approach for several weeks.

It took 575 days to complete construction and during the first 7 months the crew blasted away tons of rock consisting of 4,600 cubic yards of basalt in fog, rain and wind to complete a pad for the lighthouse. During construction Ballantyne would throw explosive powder cartridges over the water to warn ships away.

In a full gale one ship, the Lupatia, wrecked but wasn’t found until the storm was over. The entire crew of 16 men perished and only the ship’s dog survived.

Once built, the Tillamook Lighthouse was comprised of the square tower lifting upward from the one-story building that held rooms for each keeper, a kitchen and storeroom that could hold six months of supplies. The auxiliary building contained the fog signal and siren. Rain water was collected in a deep cistern carved in the rock. 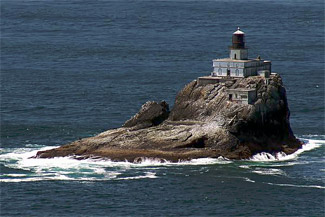 In January, 1881, the Fresnel lens was lit for the first time standing 134 feet over the water. Frequently storms would cause damage to the building from airborne rock and debris. In 1934 storms smashed the lantern house and the Fresnel lens. The lighthouse was badly damaged and it was four days before anyone could approach with aid. The cost of repairs and maintenance were high but the lighthouse is like a fortress and has stood all this time through many severe Pacific Northwestern Ocean storms. Women and children were not permitted on the rock.

The Tillamook Lighthouse Fresnel lens was lit until 1957 when the last keeper, Oswald Allik, made the following entry in the station log (now housed at the Columbia River Maritime Museum in Astoria):

“Farewell, Tillamook Rock Light Station. An era has ended. With this final entry, and not without sentiment return thee to the elements. You, one of the most notorious and yet fascinating of the sea-swept sentinels in the world; long the friend of the tempest tossed mariner. Through howling gale, thick fog and driving rain your beacon has been a star of hope and your foghorn a voice of encouragement. May the elements of nature be kind to you. For 77 years you have beamed your light across desolate acres of ocean. Keepers have come and gone; men lived and died; but you were faithful to the end. May your sunset years be good years. Your purpose is now only a symbol, but the lives you have saved and the service you have rendered are worthy of the highest respect. A protector of life and property to all, may old-timers, newcomers and travelers along the way pause from the shore in memory of your humanitarian role.”

The lighthouse was then sold to various companies and individuals over the succeeding years eventually coming into the hands of individuals with a company called “Eternity at Sea.” The interior was converted into the world’s first lighthouse Columbarium with 100,000 niches for urns promising helicopter rides for those purchasers who wanted to place an ash filled urn in solitude inside the building. As of 1996, just 17 urns resided within the Columbarium, two of which had been stolen, it was presumed, by thieves that landed at night in helicopters. It is difficult to imagine why anyone would go to that much trouble for an urn full of ashes.

The lighthouse is privately owned but the rock is still owned by the U.S. Government. Tillamook Rock, also known as “Terrible Tilly” for obvious reasons, was placed on the National Register of Historic Places which provides for exterior painting so that is looks good from the sea. The U.S. Fish and Wildlife Service is the overseer of the lighthouse which is again home to sea lions, seals and sea birds. 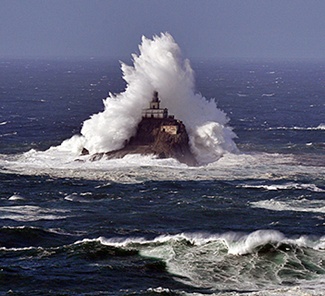 2 thoughts on “The Lighthouse On The Rock”