Heceta Head Lighthouse is reportedly the most photographed lighthouse in the United States. Viewed from the Sea Lion Caves 11 miles north of Florence, Oregon, it is framed by the cave ‘window’. Or, most often photographed from outside the cave building entrance. 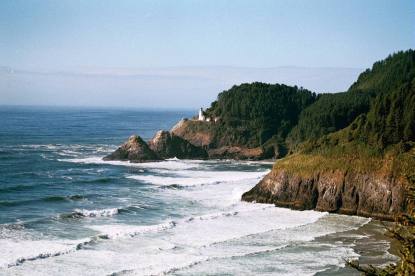 In 1755 Don Bruno Heceta, a Spanish sailor, discovered this beautiful location and the lighthouse was named after him. Construction on the lighthouse began in 1892 and took 5 years to complete although the light was lit in March of 1894. The original structure had living quarters attached for 2 assistant light keepers.

Heceta House was a single structure of living quarters for the head light keeper and his family. While the lighthouse isn’t said to be haunted the same cannot be said for Heceta House.  There is an infant’s grave on the property and the very active ghost is thought to be the child’s mother watching over it. Named Rue, the ghost often appears as a smoky grey mist and is nick-named the “Grey Lady.”

Listed on the National Registry of Historic Places, Heceta House is also listed as one of the ten most haunted places in the US due to the very active “Grey Lady.” Heceta House is a popular bed and breakfast and not one visitor goes away disappointed because they did not witness some ghostly activity from being peered down at out of the attic window to items being moved to fire alarms going off to footsteps overhead.

There is one story of a worker up in the attic who was surprised by Rue and it frightened him so he ran down the attic stairs, down the second story stairs and out the front door and refused to go into the attic again. While working on the outside of the house this same worker accidentally broke the attic window. Because he would not go into the attic, he repaired the window from the outside and left the broken glass scattered across the floor inside. That night other volunteer workers heard scraping noises coming from the attic. When they went to investigate the next morning they found a neat pile of glass on the floor in front of the window. Be sure and reserve your night at this famously haunted B&B well in advance so you don’t miss your chance to experience the “Grey Lady.” Oh, and you’ll want to climb the tour to the top of the lighthouse, too!!

Heceta Head is a working lighthouse as a navigational aid to mariners but is also a major tourist destination on the Oregon Coast. It is part of a 549 acre park with trails, view points, tide pooling, a sandy beach and more. Plan to spend some time here especially if you are traveling with children. There is so much to do. We recommend both Driftwood Shores in Florence right on the ocean: http://www.driftwoodshores.com/ which includes the Surfside Restaurant: http://www.driftwoodshores.com/restaurant-lounge.html and the Comfort Inn on highway 101: http://www.florenceci.com/ and eat at Mo’s on the Siuslaw River: http://www.moschowder.com/florence.php Or bring your RV to Umpqua River Haven and stay with us. We are just about an easy hours’ drive from this lighthouse.

As with all the lighthouses, the night views can be spectacular. This one was caught on a cloudy night but still shows how bright the light is that guides the ships in. 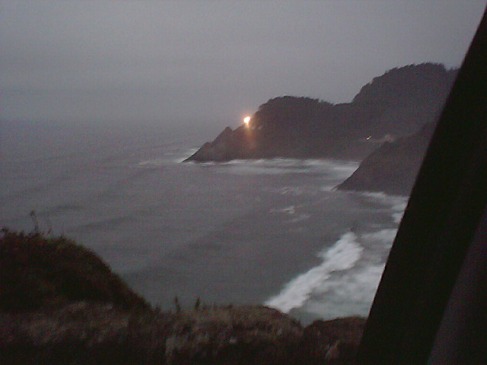