As Oregon is the end of the Oregon Trail, Wyoming is somewhere in the middle. Today’s picture/s of the day provides some of the historic landmarks along that trail. Remember the Conestoga Wagons mentioned in Picture of the Day 1? This is a drawing of one posted at Independence Rock:

This stretch of the Oregon Trail spans 154 miles between Casper and Lander of the 400 miles within Wyoming. We will actually be traveling it backwards from Lander to Casper starting with scenery along the trail.

So you can see what the Pioneers saw!

Aside from modern roads, the scenery hasn’t changed much since the wagons rolled across this prairie desert. 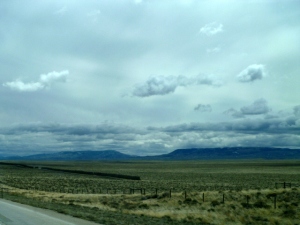 You will pass through Jeffery City, named for a wealthy Rawlins doctor who financed the mining company. Jeffery City has a very rich history. In early years it was a “mom and pop” town but in 1957 the Western Nuclear Corporation opened the uranium mine. The town boomed with the mining but in 1983 the mine was closed due to the collapse of the uranium market. A former resident at Umpqua River Haven, Lloyd Fleming, worked here in the mines when he was a young man. It’s a small world!

Today Jeffery City is an historic ghost town with a few residents not unlike Scottsburg, Oregon. 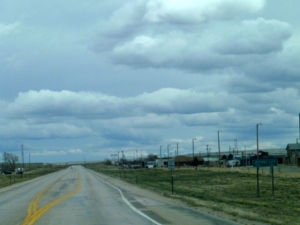 A major landmark on the Oregon Trail here is Split Rock.  Remember you are viewing what the Pioneers saw as it passed behind them while they headed west.

Split Rock was a destination for the travelers that can be seen for many miles in both directions. This was one place they stopped to rest along the trail. They knew they were headed in the right direction when arriving here on the way to South Pass 75 miles to the west.

At the viewing turnout you are next to the split where our journeyers stopped. 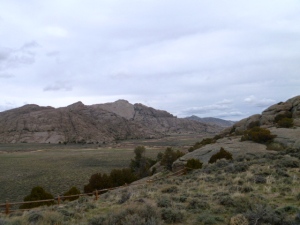 Just West of the rock a ways is the Split Rock Ranch. The ranch is 200,000 acres and sold awhile back for $8.9 million. It is in the distance in this picture

It is almost impossible to capture the vastness of the Wyoming “wide open spaces,” but this gives you an idea of what was traversed. There are ranches here and most of them hold large acreages. This arid prairie desert consists of a lot of sagebrush and tufts of bunch grass. It takes a lot of acres just to run one head of cattle and much more for an income-producing herd. It is green this spring but the grass is short amid the infinite growth of prairie sage.

Muddy Gap is the next place of note. The Muddy Creek flows through this natural gap on the Oregon Trail. Today the road splits Northeast to Casper or due South to Rawlins. Just head toward the mountains. 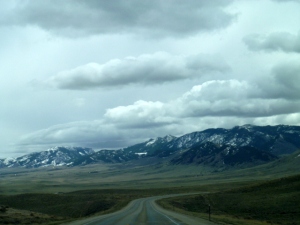 And you will come to the gap….take a left here to Casper. 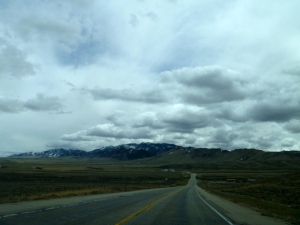 The next stop on the Oregon Trail is Martin’s Cove. The Oregon Trail is also the Mormon Trail as the Mormon’s traversed the same route during the same period in history on their trek to Salt Lake City. Native American Shoshone Chief Washakie assisted both the Pioneers and the Mormons along the trail here where he became close to the Mormons and eventually converted. The Mormons suffered tragic circumstances and many deaths before they were brought to Martin’s Cove by rescuers where they suffered through cold and blizzard for five days until the weather warmed and they were able to continue on to Salt Lake. You can visit and experience the Hand-Cart trail. 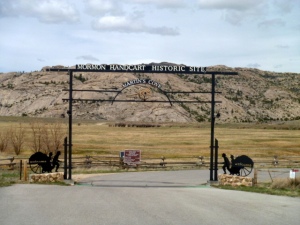 Before reaching Martin’s Cove, immigrants came in view of Devil’s Gate. There are several explanations of the naming of this site and none of them are happy. The wagons were forced to travel around the rock formation and wagon riders carved their names here.

Now on the way to Casper comes one of the most famous landmarks on the Oregon Trail, Independence Rock. The wagons worked to reach the rock by July 4 in order to be assured of making it through the mountains before winter set in. The name probably came out of the history surrounding July 4.

From the turnout viewing deck….

Many names are carved on the rock and you can get closer to read them. There was a party of highway travelers climbing on the rock. Be respectful of our national historic treasure and do no damage, take nothing away but your trash and enjoy what we as a nation have preserved of this unique, American history. 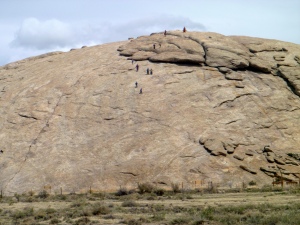 We continue on in the expanse of Wyoming toward Casper….

Stopping at Lake Alcova. Wyoming doesn’t have a lot of lakes but the ones there are have become popular for fishing, boating and other water related activities. Lake Alcova was created when the dam was built in 1937 to provide water for local agriculture. Named after the existing town of Alcova, there is a marina with boat docks not unlike Winchester Bay, Oregon.

And now traveling on into Casper….the largest city in Wyoming!

Further South in Wyoming is a favorite landmark on the Oregon Trail. It can be seen from over 100 miles away in Nebraska as you travel this historic trail, the 10,276 ft Laramie Peak. 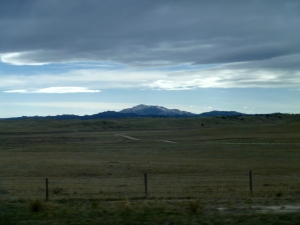 I awoke this morning to the music of rain on the roof, a common wake-up tune in Oregon. Eventually realizing I was not in Oregon I breathed gratitude for the welcome rain in arid Wyoming.